Video: the central video to the initial launch campaign in 2017.

Campaign Snapshot:
John Holland Rail and technology partner 4Tel were launching an exciting new App called ETW (Electronic Track Work) for their protection officers around NSW. This initiative was ground-breaking within the rail industry and warranted a new communications approach to engage staff at training sessions and bring the concept to life for launch. Until this point John Holland Rail had never engaged a creative agency like Strategic Minds to assist with communicating internally so this was new ground. Language used in the campaign had to be simple and visuals needed to be engaging and relevant.

Campaign Strategy:
Strategy Stage 1: A new product brand identity was created that worked with existing John Holland brand guidelines, and delivered across various media with an emphasis on video communication. These videos were also used for online training for staff and also informing senior management at John Holland, Transport for NSW and others in the industry on the benefits of this new app-based technology and safety process. Throughout the communications the safety benefits of this new initiative were strongly emphasised.

Strategy Stage 2: 6 mths after launch the ETW application was improved and updated, and a follow-up campaign was launched informing of these updates.

Target Audience:
Primary Audience: Protection Officers (around 3-400 empty as staff or contracts across NSW).
Secondary Audience: Senior Management and other Stakeholders incl. Transport for NSW (to inform them of the technology and prioritisation of safety within the rail network)

Campaign Strategy Implementation and Phases:
Strategy Part A: implementation of ETW (Electronic Track Work) Campaign:
1) Branding the campaign in a strong, unified identity was key, and this applied to all campaign touchpoint.
2) Ensuring messaging and script was speaking to the right audience in the right way
3) Supporting training sessions with a strong, engaging campaign for maximum impact
4) Making videos and material available post-training sessions, and online for those not at training
5) Overall safety emphasised throughout as the key message: John Holland have created ETW for safety of staff

Strategy Part B: 6 mths after launch the ETW application was improved and updated, and a follow-up campaign was launched informing of these updates.
Phases 4-5:
4) Follow-up updates to the campaign 6 mths after launch
5) Currently working on third stage updates (Feb 2019)

Campaign objectives were obtained due to high level of staff engagement, success at the training sessions, a high degree of brand recognition, and significant increase in awareness of safety across the organisation. Product take-up was fast and met KPI’s. ETW 1.0 App update was hoped to be 50% within the first two months, but achieved over 80% in less than that time. 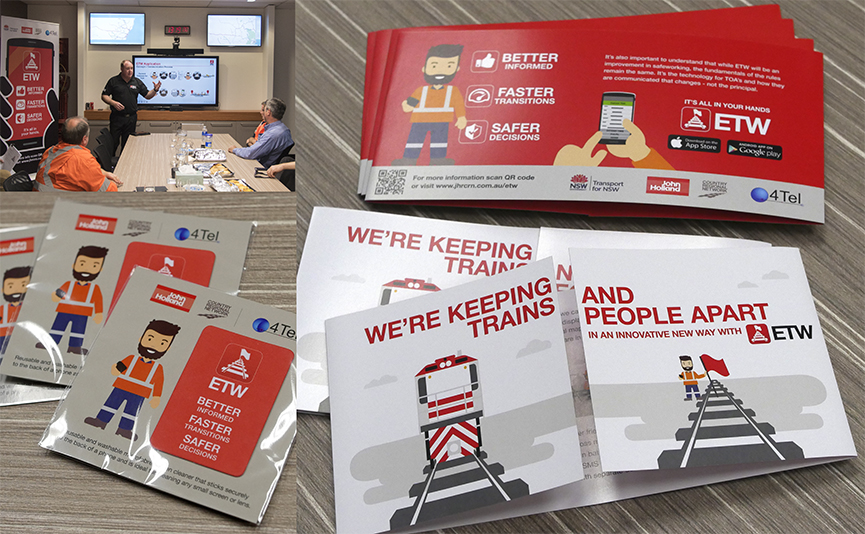 Timing:
Launched 2017 for ongoing use with campaign updates currently in progress in 2019.

Outcome and Evaluation:
This campaign is ongoing, and was very successful in educating staff about the new technologies that they were required to adopt. Training staff appropriately required an integrated campaign to engage staff and ensure that the industry-first was well received across the Australian rail industry. 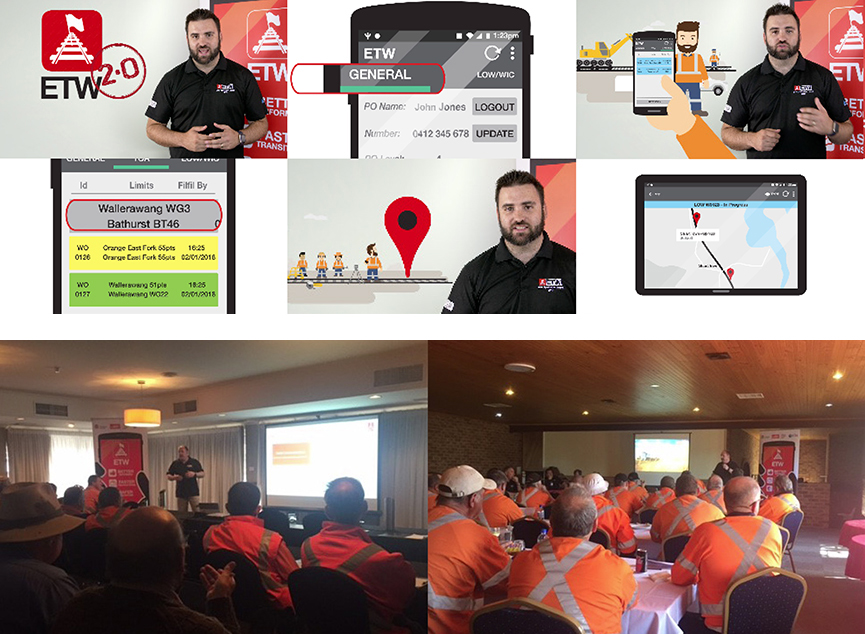 Andy and his team were able to take a complex change that we were introducing, as an industry first, and was able to break through this down into key messages and create a campaign with incredible impact for all of our users.Ben Hope, Manager Network Operations, John Holland Rail